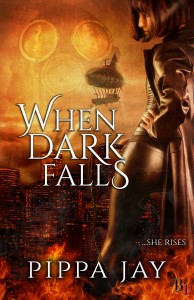 Kadie is a young woman trapped in the city of Nephopolis, where “morning comes in flame and darkness.” Although she has tantalizing clues, she has no memory of her life before. Now, she slaves for meager rations under the tyranny of the man known as Dark, whose cloudburners toil daily to blot out the sun. Only the occasional distant kindness of her manager, Jev, leavens her endless labor, and Kadie is drawn to him. But it’s too dangerous to act on her feelings, as the slightest infraction could mean a death sentence; or worse, the slow and painful metamorphosis into the monstrous nightcrawlers who enforce Dark’s will. Kadie remembers Dark didn’t always rule. The superheroes of her time had died trying to oppose him, even Blaze, the greatest among them. But Dark’s costly victory had left him permanently scarred.

Nocturnelle is a rogue superhero, her past a mystery even to herself. Her considerable powers earn her a wary acceptance among the few low-talent survivors of the Alliance of Super Heroes and Heroines. Nelle’s cybernetically enhanced sidekick, Shadow, is the only minor hero who is willing to trust her. But he draws the line at exploring their mutual attraction, insisting a deeper relationship would violate league rules, making them both outcasts. Neither are willing to risk their partnership with ASHH when there’s important work to be done. Together, they slip into the night to gather intelligence and battle the tyrant’s thugs and his eerie nightcrawlers. Nelle has one goal: to defeat Dark or die trying.

Nelle doesn’t realize that Dark is moving swiftly to fulfill her death wish, and that Kadie holds the key to her mortal weakness.

‘Punk of any kind is usually not my genre, because authors too often get so caught up in the gadgetry that they shortchange the characters.

Pippa Jay is not one of those authors. The technology of her world is deftly–even beautifully–described, vividly calling up the scene without the eye-crossing detail that causes me to flip ahead, looking for the story. Instead, the decopunk blends seamlessly into, and supports, the story. And the characters and fast-paced action caught me up and drew me into a toxic world where love is a risky endeavor for good people and heroes alike.

Pippa’s characters have depth. Alone, afraid, barely subsisting, Kadie could easily have been a wilting flower. But her courage in facing her fear and the daily grind comes through. Nocturnelle could have been simply a kick-ass superhero. But we get to see the doubts and insecurities behind her driven determination.

In shorter books, something has to give. But here, not so much. In addition to sympathetic characters and strong world-building, Pippa delivered a plot with plenty of action, with only one minor challenge to my willing suspension of disbelief. The force of the story rolled right over it.

This is a book I would’ve swallowed in one sitting. But I made the mistake of starting When Dark Falls right before I had to leave for a friend’s party. I spent a lot of time wondering how the story would turn out. I would suggest you make sure you’ve got a sufficient chunk of time, then get yourself a cup of tea, or pour a glass of wine, and settle in for a good read. Then, why four stars, you ask? My star ratings are on a logarithmic scale. Check out my ratings on goodreads, and you’ll see even my long-time favorite authors don’t always achieve five stars. For me, three stars means, the book was good. Four stars means, the book was excellent, and I’ll look for this author. I think you will, too.

40k; 2/5 heat level. I received a copy of this book from the publisher in exchange for an unbiased review.