The e-ARC had the usual skips and errors, so of course I’ll be reading the official release, too.

The Vorkosigan saga is unique in its memorable characters, and the kind of tales it takes to tell their stories. In some ways, “Captain Vorpatril’s Alliance” consolidates most of the major events of the Vorkorverse, seen from a very different point of view.

The long-standing supporting character, Ivan Vorpatril, finally gets his turn in the spotlight. Ivan lives the life of a smarter moth. Standing too close to the Barrayaran throne for his own comfort, no way does he want to fly close enough to the fire to go up in flames. But he often gets dragged into scrapes–interstellar scrapes–as the unwilling foil to his cousin Miles’ manic schemes. This time, Miles doesn’t drag him into trouble; neither is he around to pull Ivan out of the fire. And it was kind of weird reading a Vorkosigan tale without Miles in it except as a domesticated husband and father…weird, but an enjoyable grace note to the story.

No, this time it’s By Vorrutyer’s scheme that disrupts Ivan’s peaceful life as the promotion-avoiding aide de camp of the Barrayaran military’s ops chief. But for the sake of the girl and Barrayar, Ivan rises to the occasion, as he’s done in the past despite his inclination to fly under the radar. In doing so, we get an interesting peek at Ivan’s lingering demons, the truth behind his suave facade. Hey, despite his usual nonchalant attitude, he’s gotta have a few, growing up on Barrayar in interesting times with Miles as a cousin.

I’m not quite sure why Bujold chose to place this book before “Cryoburn,” and I don’t know why that bothers me so much. Perhaps because I want the Vorkoverse to keep moving forward. Although I’ll admit the tone of the book is happier than might have been possible in Cryoburn’s aftermath. Happier, but also retrospective. The characters have all grown up, done wonders and marvels, made mistakes, and learned from it. Even Ivan. I can’t help but wonder (or is that hope?) that having given us a glimpse of life going reasonably well for the main characters, Bujold is cooking up another major challenge for her incredible cast of characters in the near future. Using Bujold’s maxim of the “worst possible thing,” possibilities are boiling in the back of my mind, but mentioning them would involve spoilers, so…hmmm.

Why four stars? More than a bit unfairly, I’m rating a Bujold book against Bujold’s body of work. There’s a reason Bujold is my favorite author. Her best stories are…spectacular. As much as I enjoyed reading this, CVA isn’t “Shards of Honor,” “Memory,” or “A Civil Campaign.” So call the CVA rating a “Four Stars with Palm” for filling in the spaces in a really remarkable ‘verse.

View all my reviews

There’s a reason my main protagonists in “Forge” play an instrument, sing, or both. Most of my family does, too. We pick’n’grin together during the reunions. Last week, my 14-year-old cousin was teaching me some chords on the mandolin (he’s a pretty hot picker), until my ad hoc music workshops came to an abrupt end when I jammed my wrist helping to put up the event tent. (The 30’x60′ ones people usually rent.) So this year I got out of a lot of dishes, and sang instead of played guitar and mandolin…but the music went on. And now I’m back in Texas, typing mostly south paw, and looking forward to next year, when I’ll be back on the happy side of jammin’. Does music play a part in your family celebrations?

I am pleased (delighted, elated) to announce that “Forge: Book I of the Thrall Web Series” is now available for your Kindle or Nook at Decadent Publishing, Amazon.com, and Barnes & Noble.

Thanks to everyone who helped along the path of this journey. You’ve shared the trials…now share the joy! 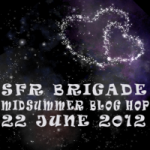 What is the SFR Brigade, you ask? The SFRB is a collection of authors who write science fiction romance, where anything can happen to characters you care about…anyplace and anywhen the imagination can concoct.

In celebration of the summer solstice, on Friday 22nd June (Pacific Time) the SFR Brigade will be holding its first-ever Midsummer Blog Hop. Thirty-seven fabulous science fiction romance authors will be telling you mystical or scientific stories related to the event, and they’ll each be giving away a prize – books, gift cards, swag bags…and lots more!

My addition to this prize-fest: Anyone who comments on my Midsummer Blog-Hop post on June 22nd will be entered into a drawing for a free copy of “Forge”** (in the winner’s preferred electronic publishing format) and a $10 Amazon gift card.

1st Prize – a Kindle Touch or Nook Touch
2nd Prize – a library of science fiction romance titles from more than 20 authors (mostly in ebook format, with one print anthology) and an Anabanana gift card.
To enter, visit as many blogs listed below as you want to (like mine! ;D) and leave a comment. Each time you comment at a stop, you’ll earn one entry for the grand prizes–so, the more sites you visit, the greater your chances of winning.
Winners will be drawn at random on the 24th of June and announced on this site. The list of participating authors follows, below. Spread the news!